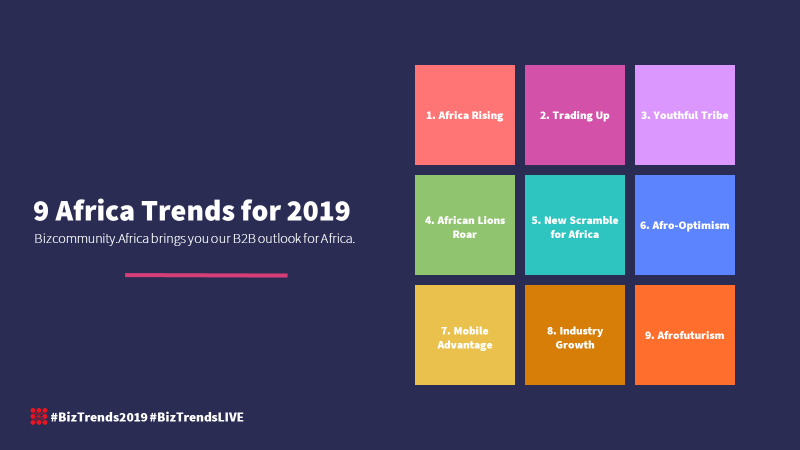 Africa Rising, Afrofuturism, Afro-optimism… These are all words we’ve heard bandied about for several years now as the ascension of the African Continent to its rightful place on the global stage has begun. Fuelled by economic growth, a rising middle class, increasing political stability, younger leaders, more women leaders, untapped resources and a trade deal that will change the world and Africa’s fortunes along with it – it is finally Africa’s time!

These are the top trends for 2019 for Africa:

Africa is poised for explosive economic growth, similar to the Asian boom, says a new book by McKinsey, Africa’s Business Review Revolution: How to Succeed in the World’s Next Big Growth Market. Seven of the top 10 fastest-growing countries in the globe are in Africa. ‘Africa Rising’, ‘Afrofuturism’, ‘Afro-optimism’, and the moniker, ‘emerging markets’ or worse, ‘third world’, are all terms that are in recent use to describe the current transformation of Africa in the eyes of the Western world, politically, economically, culturally, etc, and we acknowledge that they are “flawed narratives”, but at least the conversation has started on Africa’s emergence as a global superpower, changing the war-torn/poverty-porn narrative that the West likes to peddle, thereby diminishing Africa’s achievements and rich history, pre-colonialism.

AfCFTA will ensure that the 55 recognised states in Africa emerge into a single market of 1.2 billion people with a combined GDP of $2.6 trillion. 44 countries signed up in March 2018, and more are coming on board every month. The objective is to create “a tariff-free continent that can grow local businesses, boost intra-African trade, rev up industrialisation and create jobs”. This is according to the United National Economic Commission for Africa (ECA).

Africa is the only region in the world where the youth population (those aged under 25 years) is increasing. Latest predictions have put the youth population in Sub-Saharan Africa at 945 million by 2050 (this excludes North Africa). The figures do vary – anything from 500 million up, but there is no doubt that Africa’s youth population could be a “global growth engine” or a “ticking time bomb”, depending on whether we do enough to promote entrepreneurship on the continent; skills training; and assist the youth in getting jobs. It remains Africa’s “defining challenge”, according to the UNDP.

Africa’s mighty middle class, 100 million strong, have a spending power of $400 million per day (R1.3 trillion). They are hungry, aspirant and well accustomed to the “hustle” required to make a living in some of the world’s poorest regions. Marketing to this aspirant and growing consumer segment in Africa was the subject of the broadest research study ever into consumers on the African continent, conducted by the UCT Unilever Institute of Strategic Marketing in 2017.

It is all about the hustle and improving their lives and the lives of their families and communities, according to the research. Many of the middle class in Africa work more than one job to stay above the poverty line. They are resilient and determined and building an entrepreneurship model that is defying the lack of formal employment opportunities on the continent.

With abundant natural resources and the youngest working population in the world, African nations are being courted by China, India, Russia, the EU and the UK in the new scramble for Africa. It is time for the continent to reclaim its sovereignty, said researcher Ahmed H Adam, writing for AlJazeera: “The world’s most powerful nations are once again competing for the control of the abundant natural resources of the African continent… in a ‘new scramble for Africa’. These foreign superpowers should only be allowed to operate in Africa as long as their actions are also beneficial for the continent.

“Most importantly, African masses, civil society, youth and women groups should play a leading role in Africa’s relations with the world – the era of gatekeepers must end. It is natural and vital that Africans engage with the world directly,” Adam said.

While Africa’s superpowers, South Africa, Nigeria and Egypt have all suffered political and economic upheaval in recent years, losing their place at the power podium for a while, all three nations have remerged on the African and global stages. It is also encouraging how North African powers like Morocco and Egypt want to be seen as part of the rest of Africa.

In reasons why you should be an Afro-Optimist, Investing in Africa blog and the influential Economist, report that modern Africa’s record of progress “is nothing less than extraordinary”.

Mobile subscribers for Sub-Saharan rose by 44% in 2017 and smartphone penetration increased 75%. Mobile broadband is anticipated to comprise 87% of total connections by 2025 across 690 million smartphones. The race to turn the continent into a “Smart Market” putting smart products and services into the pockets of the African consumer, is on, and the African consumer expects this democratisation of technology, according to Trendwatching.com.

According to a paper, Entrepreneurship development in Africa: an overview, by Allam Ahmed and Sonny Nwankwo, two UK academics, the entrepreneurship eco-system in Africa is flourishing. “The most profound and encouraging change in African economies over the past decade, has been the rapid advancement towards integration into the global economy. Many of the countries have undertaken significant economic reforms; improving macroeconomic management, instigating conducive private investment climate, liberalising markets and widening the space for entrepreneurship to drive strong and inclusive growth,” they wrote.

This “genuine” opening up of African economies and concerted effort to promote entrepreneurship as a force for sustainable economic development will lead to the expected economic “renaissance” of Africa, as they put it.

Afrofuturism was the buzzword at Design Indaba last year and after the release of the wildly successful Black Panther movie. African content, fashion, art, music and culture is treading the global stage and true African history is being interrogated past its Colonial roots. Afrofuturism is about changing the imagery out there that reflects Africa, the stories we tell about Africa. It is about a new conversation, a new narrative – one written by Africans. Afrofuturism is about “putting yourself into everything that you do… redefining how we as Africans see ourselves…” said filmmaker, Sunu Gonera at Design Indaba 2018.

*This article was written by Louise Marsland and first published on Bizcommunity.Africa, 31 January 2019, #BizTrends2019.