We need to believe in African mermaids 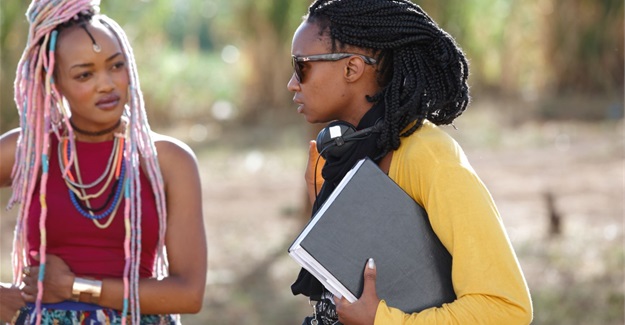 Growing up, highly-awarded Kenyan filmmaker, Wanuri Kahiu, had never seen films that portrayed Africans in love. Kahiu wants to change the narrative on Africa – for the rest of the world and for Africa. Why should we only speak about war, poverty, pain? She wants Africa to also be known for its joy, its beauty and rich history.

“We’ve allowed these stories about our pain and suffering to be told about ourselves as the only narrative on Africa. And if these are the only stories, how can Africa – and the rest of the world – see Africa as anything but desperate and in need of help because they are hopeless?” Kahiu asked. “How do we imagine anything better than that?”

Kahiu is part of the new generation of African storytellers. Her books and films have received international acclaim, with her films screened at numerous film festivals around the world. She started Afrobubblegum media company with other artists as a celebration of art for art’s sake and to portray the joyful stories of Africa.

On stage at Design Indaba 2019, she referenced the famous photo books or photo comics that were popular across Pan-Africa in the 1960s up until the 1980s, featuring homegrown African heroes in various guises. They were written in Nigeria, shot in Swaziland, edited in South Africa and printed in Kenya and Ghana. Hundreds of thousands of copies would go out across colonial Africa and Apartheid South Africa. Stories featuring Son of Samson, about an African superhero strongman in red latex and a cape; Spear, an African private eye with “a charming way with girls and deadly to the thugs”; and even a female superhero, way ahead of Wakanda’s heroes, called Cobra, the serpentine ‘shero’. Kahiu said people used to line up around the block to get the next issue.

She has looked at how many African artists are creating joy culture through their work. “I often imagine if these are the kind of images that we used to portray Africa in our messaging… would we think that we were worthy of the pursuit of happiness?” she asks in a talk she gave at the World Economic Forum.

She doesn’t want the people of Africa and their joy to be misrepresented. “Joy is an inhibitor of fear and is an antidote to suffering. We need a different view of a global Africa.”

She encourages African artists to create for themselves, for their joy, not in a reaction to the West.

Kahiu is probably best-known right now for having her film about same sex relationships, Rafiki, banned by the Kenyan government for promoting homosexuality. A passionate Kahiu is adamant that she will fight the ban all the way, challenging the old colonial censorships laws, as well as having to prove that no heterosexuals became homosexual after viewing her film. Seriously.

She has written and directed six films, Rafiki is her second feature film. Her first film in 2008, From A Whisper, was based on the real-life events surrounding the twin bombings of the US Embassies in Nairobi and Dar es Salaam in 1998, The film won awards at the Africa Movie Academy Awards, including Best Director and Best Picture; the Golden Dhow award at the Zanzibar International Film Festival, and Best Film at Kalasha, Kenya Film and TV Awards.

Her short science fiction film, Pumzi (2009), that was partially funded by Focus Features, Goethe-Institut and Changa Moto Fund in Kenya, screened at Sundance in 2010. Pumziwon Best Short at Cannes Independent Film Festival, May 2010 and took Silver at Carthage Film Festival in 2010.

As regards Rafiki, the publications board in Kenya said they would allow her film to be shown with an age 18 restriction, if she changed the ending to be more “remorseful”, than hopeful. She refused and they banned it.

And it just made her more determined to show the joy in African stories, the “fun, fierce, frivolous, joyful nature” of everyday life in Africa, complete with daily rituals in which various cultures across the continent express joy and beauty.

“Africans are radiant, curious beings. That is what we have always been. We need to have a different perception of who we are and who we always have been and how we go out into the world and see the people of colour in our neighbourhoods, as people of joy and radiance.”

Her research led her to African mythology, of mermaids which were worshiped for good luck; of the African dragon that could sometimes spit fire. “It is amazing that we have had that as part of our continent’s culture. They were mythical creatures which denoted hope, joy, the ability to transform.

“The thing is, dragons didn’t come from the West, it was part of our culture all along. To be able to glorify the ideas of these beings in Africa, prove more than the ideas of Africa’s suffering and pain, but rather the ideas of our exuberance and creativity.”

Kahiu recounted how after Rafiki was screened (in a seven-day window when they managed to get the ban overturned briefly), people came up to her and said they saw themselves.

“It is the same thing we have to do with joy. We have to see ourselves as people of joy. We are not a remorseful people. Black Panther cannot be our only example. There are stories of joy to be told, and they need to be told by us. Do your part.”

*This article was written by Louise Marsland and first published on Bizcommunity.Africa #DesignIndaba2019.